Learn to grow and care for Sulfur Cosmos, a long blooming favorite of native pollinators, butterflies, and bees!

A staple of pollinator and meadow mixes are the many varieties of cosmos. Two of most commonly used are the Wild Cosmos (Cosmos bipinnatus) also known as the common Cosmos; and Sulfur Cosmos (Cosmos sulphureus).

The striking oranges, yellows, reds of the Sulfur Cosmos have become a favorite to use in our pollinator gardens and hedgerows.

Walking by the stands of flowers teeming with life as the native bees and butterflies busily move from flower to flower, you can’t help but stop and watch!

What are Sulfur Cosmos?

They’re included in many pollinator and wildflower meadow mixes, and due to their rapid growth they’re one of the first to bloom in these mixes. With their clumping nature they make an eye-catching display of blooms when planted in medium to large groups.

Sulfur Cosmos is a species of flowering plant in the Asteraceae Family (Daisy/Sunflower). It grows between 2-4 feet tall and has a spread of 1 foot per plant.

The compound leaves are between 6-12 inches long with deeply cleft leaflets. The leaves are arranged opposite each other on the flower stem and have lanceolate, pinnatifid shape.

The flowers are daisy-like between 1-3″ in diameter and come in many colors – yellow, red, orange, and pink.

What are the soil requirements?

Sulfur Cosmos don’t have many soil requirements. They prefer neutral to slightly acidic soil but will tolerate poor soil. Native to Mexico, Central Mexico and South America; these arid dry regions means if you have a dry sunny place, sulfur cosmos should grow fine!

What are the sunlight requirements?

Sulfur Cosmos prefer full sun with at least 6-8 hours of sunlight. They’ll grow in partial shade but tend to get leggy with a smaller amount of blooms.

How do I plant?

These wonderful flowers can be planted alone or with other flowers in the garden. Sow the seeds in a finely prepared seedbed when soil temperature in spring has warmed up to at least 65 degrees. Sprinkle seeds, then rake into the soil to lightly cover. Water well and keep the soil moist for 5-10 days after seeding. Seeds germinate in 7-21 days and bloom in 56-60 days.

Sulfur Cosmos attract a wide variety of native pollinators and butterflies. These flowers are teeming with life from early morning till late evening. On many flowers you’ll find bumblebees spending the night under the flower heads, waiting for the next morning to busily get back to work!

How much do I need to water?

Sulfur Cosmos can tolerate a certain amount of drought. After the seedling is growing and healthy, natural rainfall should be enough to ensure a healthy plant.

Do I need to fertilize?

Sulfur Cosmos don’t require fertilizer as they’re adapted to poor soil. Overly fertile soil or fertilization can lead to plants with strong stems and many leaves, but fewer blooms.

Do I need to prune or deadhead?

Sulfur Cosmos can get spindly as the season wears on. You can pinch young plants back after they have developed 4 pairs of leaves. This will allow the plant to become bushier and have more blooms.

If you want to extend your bloom time, then deadheading your flowers will greatly improve the length of the bloom season. I do this whenever I walk by the planting. If I see a dead flower head that has gone to seed. I will pinch it off and crumble up so that it falls to the ground among the existing planting.

Do Sulfur Cosmos Reseed Themselves?

Spring planted cosmos will have an abundance of dried seed that can be collected later for sowing in other places. If the dried flower heads are left in place, the seed will fall to the ground and germinate in the warmed soils of summer. This will increase the density of the plant population over time.

Sulfur Cosmos are considered a half-hardy annual and can’t withstand low temperatures. While they may come back in the spring depending on how harsh a winter you have had; it never hurts to save some seed or have some hand to fill in the following spring.

Sulfur Cosmos bring great value to pollinators, butterflies, and birds as a nectar and food source. Planted as part of a wildflower stand, it helps provide valuable habitat for many native critters through the spring, summer, and fall seasons.

The flower blooms are long lasting and versatile, working well as a border plant, a cut flower to enjoy indoors, in flower beds, or they can even be grown in a container in full sun.

Our favorite way to enjoy them is with a chair and time to watch the amazing show that nature is providing! 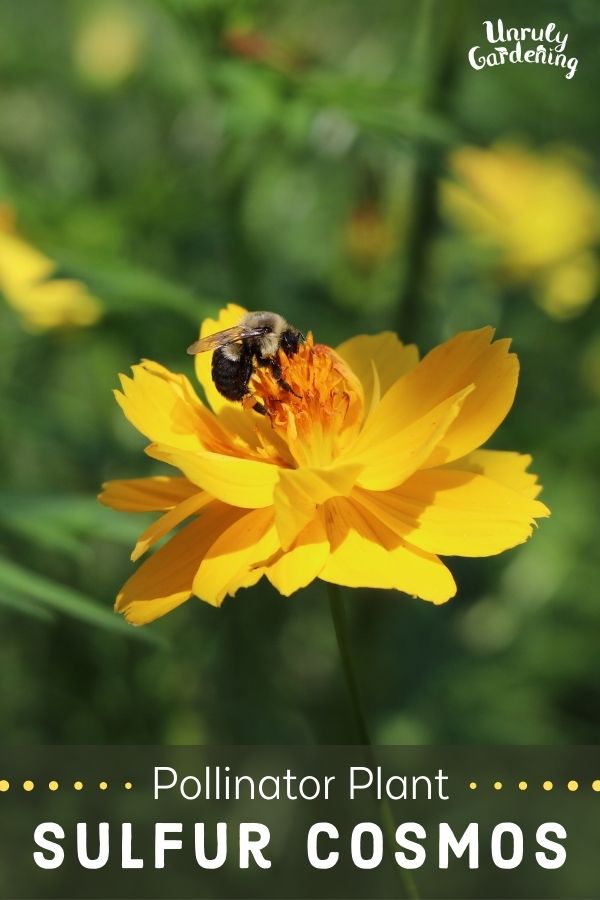